A medieval merchants house in the heart of the town – Abingdon’s oldest house and Oxford Preservation Trust’s too....

26 & 26 a East St. Helen Street were left to Oxford Preservation Trust by Miss Baker in the 1970s. Aware of their importance the family wanted us to look after this and we do just that. It needs to be lived in as a house, so we have a sympathetic tenant who is happy to show visitors around.  Keep updated with the latest events and book your own space on a tour of the Merchant's House by clicking HERE.

Come and see the vibrant 16th-century wall-paintings which cover the walls on the first floor, and marvel at the gallery lit by a timber window with its original intricate gothic tracery. We know that the two houses were once a single house and where the covered coach entrance has been knocked through, is where there was once an open fire – this house dating back to before the invention of the fireplace. Smoke blackening on the roof timbers gives us the evidence we need, and it is here that a child’s doublet was found, pushed up into the rafters – was it to ward off evil spirits, as was once the custom?

The front part of the house consists of a hall and two side wings, and back has one original wing and a gallery linking with another wing. The rear wing has fine stone fireplaces, panelled ceilings on the ground floor, and the 16th-century wall-paintings on the first floor. This building is certainly one of the most remarkable Medieval town-houses in the region, and its date of construction, now determined as c.1430 by dendrochronology, is of interest in dating certain carpentry features.

The house was acquired by the noted Abingdon historian Agnes Baker in about 1946, and was bequeathed to her sister Mary Baker in 1955. Although when purchased it was 'a condemned slum', it was carefully restored by Tony Lloyd of Curtis Green and (after 1949) by Walter Godfrey.

In the back room there is the remnant of a fine late-Medieval stone fireplace, with quatrefoil patterns on the lintel marking the inner face of a row of quatrefoils in squares that have been hacked off. The ceiling of this room is covered with oak panels, a very unusual feature, though they have been scraped clean of any painted decoration they may once have had. There were twelve panels in each half of the room, though these have been truncated by the building of the brick wall and insertion of the partition wall for the stair.

{The ceiling panels are of imported Baltic Oak and from the wider investigations of the wood used in the house, it is thought that they were laid in the 15th Century, roughly contemporary with the house being built.}

In the mid-16th Century the first-floor room of the rear south wing was completely decorated with a bold design of red and white vertical stripes on which floral groups were depicted. Now surviving in a large section on the west and south walls, traces of painting can also be made out on all the timber posts on the first floor, and more may still survive on the intervening walls. In the south-east painted plaster was observed during the works near an area of collapsed plaster.

These consist of broad vertical stripes of red and white with large floral design, the overall scheme being similar to work in Christ Church and Trinity College of mid-16th Century date.

The staircase is rebuilt, though possibly in its original position, judging from the curved recess in the south wall where it rises.

From the south rear wing a glazed gallery crossed to the other wing behind the hall...the small opening next to this on the west may be the original door. The window to the yard is remarkably well-preserved despite restoration, and consists of a row of two-light trefoil openings set in a square panel, each with an upper traceried head...this is also dated by Margaret Wood to the late 15th Century.

Investigations by Dina Eastop and the Textile Conservation Centre (formerly a department of the University of Southampton) in early 2000s have revealed the rarity of this as an example of a child’s ‘ordinary’ garment dating from the early seventeenth century. Analysis has shown that it is fashioned from brown wool dyed blue, and a reconstruction has been made which can be seen at the house.

The doublet may have been concealed deliberately, although other schools of thought say that it may simply have been discarded, as a large square section has been cut out of it.}

The most imposing feature on the first floor is the timber-framed south rear wing of 26A. This was a single large room with a Medieval fireplace in the south-east corner, the square-headed lintel having an arcaded frieze of eleven trefoiled panels, dated by Margaret Wood to the late 15th Century.

Plans drawn in the 1950s are displayed on the landing. There is more detail of the carpenters’ marks, and cataloguing of the roof beams, in the fold-out pages of the Oxford Archaeological Unit report.

{It is widely thought that the garden may have once extended down to the river, and that it may have been associated with a merchant who could have had a wharf or warehouses on the extended plot.}

{From the garden looking towards the entrance, there is an attractive view of the full length of the gallery spanning 26 and 26A.}

{A survey from 1946 reveals that much of the garden area was occupied by more buildings, including wash houses and a workshop which were demolished. The garages are the remaining parts of a small row of cottages, 1-2 Ivy Cottages, which were also removed. There is evidence of a fireplace remaining in the garden wall that follows the line of these cottages, though this had to be restored in Winter 2009 due to the deterioration of the structure.}

In 2020, extensive work was undertaken on the gallery window which dates from c1430, after a survey uncovered considerable deterioration.  What began as minor repairs to the window itself developed into an intricate project including major repairs to both the roof and the frame.

Repair and Conservation of a Medieval Window in Abingdon_3.pdf

With many thanks to the writers Dr Daniel Miles FSA and Sally Stradling FSA, IHBC, MSc.

These notes have largely been copied verbatim from parts of the much longer booklet An Investigation of a Medieval Town House, prepared by Oxford Archaeological Unit in February 1995. Text added that is not directly taken from this report is marked by {brackets} 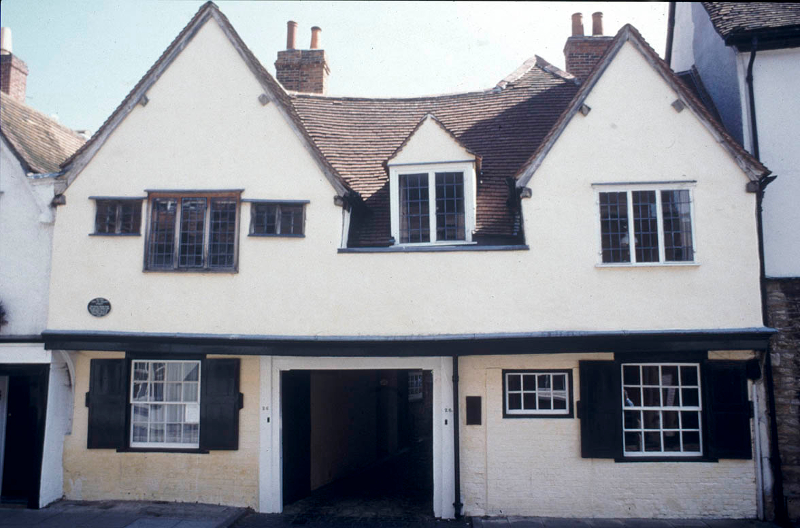 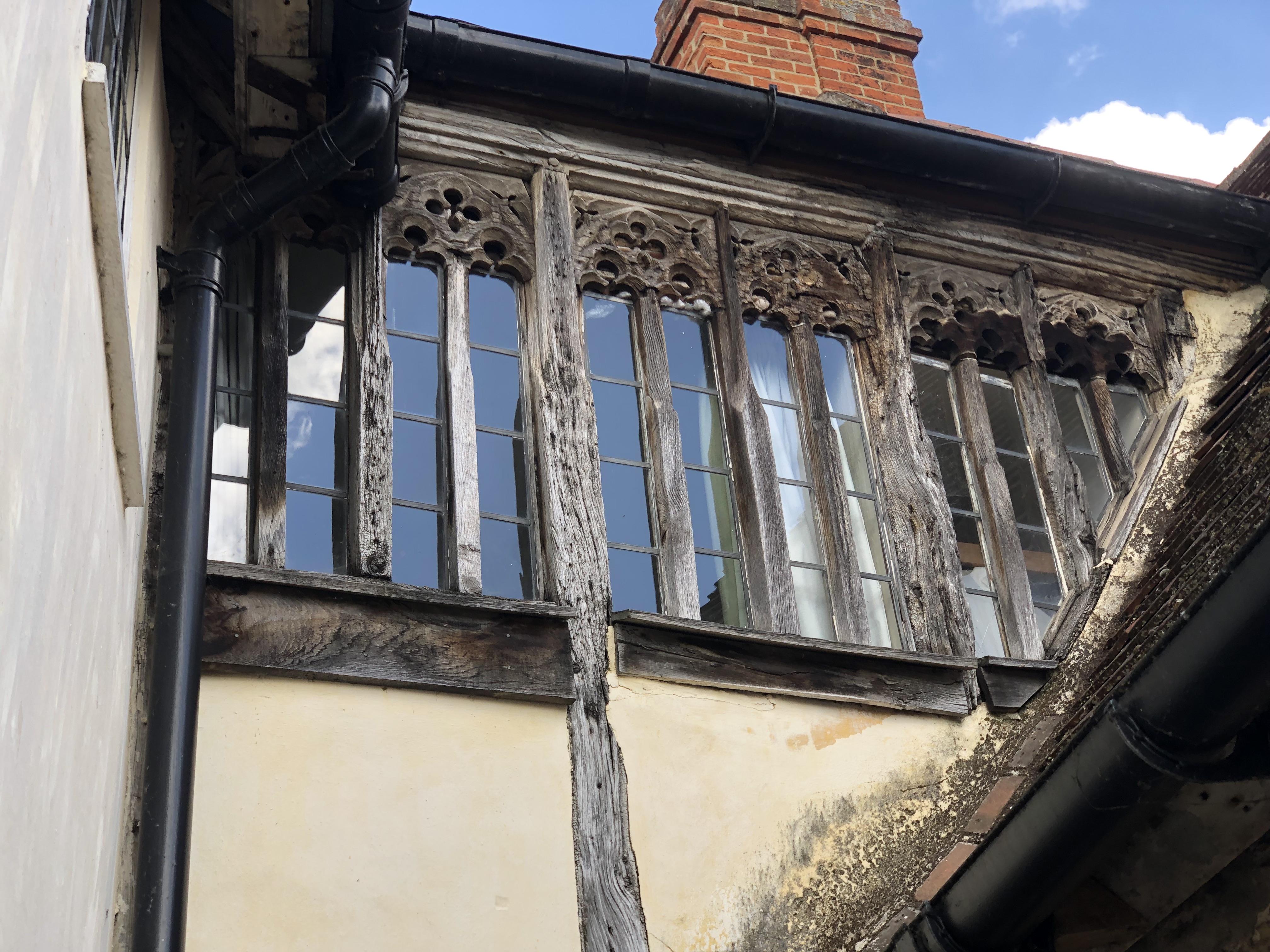 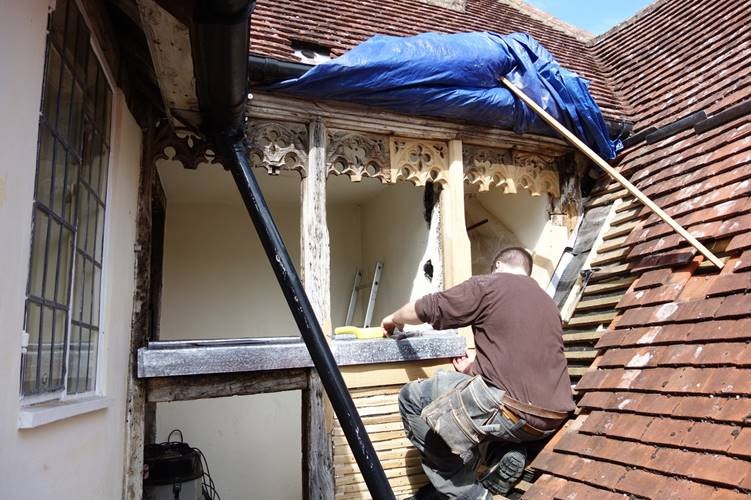 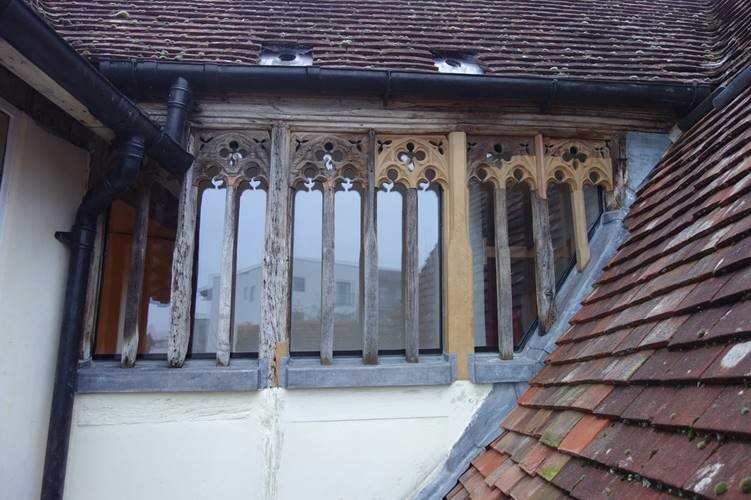