The Wall Paintings, OPT, and the Painted Rooms as our first Oxford office

These rare examples of Elizabethan wall paintings have a history all of their own.  They date from around 1580 when it was fashionable to paint walls in this way. By 1600 the fashion had changed, and instead of stripping back the walls, they simply covered them up with oak panelling. And there the wall paintings remained untouched and forgotten for over 300 years. It is not until 1927, when the owner an Oxford businessman and gentleman’s outfitter, Mr. E. W Attwood, carries out some work on the caretaker’s flat – and the paintings are revealed! Imagine his surprise and how lucky that he realised their importance and called in the experts. The paintings were restored, and the panelling put of rollers. A lot of the building was lost at this time and some of the wall paintings were removed to the Ashmolean, and later placed on the wall in the Oxford Museum in the Town Hall (currently closed).

OPT was set up in the same year as the wall paintings were discovered 1927 and Mr. Attwood was a Trustee and gave us our first offices, where we remained until we moved to St. Ebbe’s to our Turn Again Lane offices in the 1970s. (Sir) John Betjeman was the OPT Secretary in the 1940s and had his office in the Painted Room. 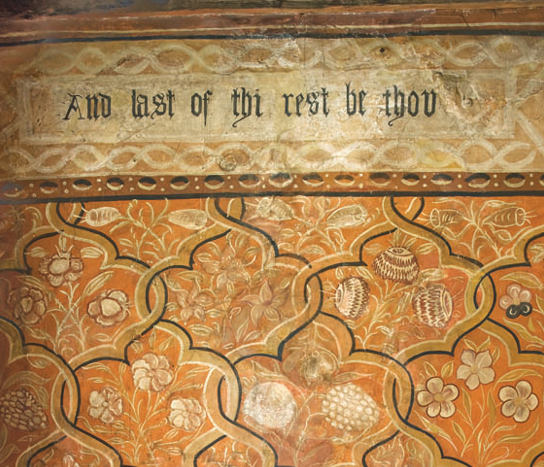