“The Covered Market is dear to all our hearts, so to demonstrate Oxford Preservation Trust’s support for it, and with the help of The William Delafield Trust, we are working in partnership with Oxford City Council to restore the Lindsey Butcher’s units to their former glory.”

Oxford Preservation Trust received a generous grant from The William Delafield Charitable Trust to support the restoration of three stalls (Units 46-48) in Oxford’s Covered Market, positioning the town’s heritage at the heart of the city. This project sought to reclaim the original design of the high-quality retail units and showcase historic craftsmanship within the locally and nationally significant heritage asset that is Oxford’s Covered Market.

The Covered Market, in its original form, first opened in late 1774 and has remained in continuous use ever since. It was designed by architect, John Gwynn (who also designed Magdalen Bridge), as a replacement to the street markets. The sale of meat, fish and poultry on Oxford’s streets was banned, with the passing of the 1771 Oxford Mileways Act signalling a gear change in the local history of transport, trade, and industry. The Mileways Act sought to encourage traffic into the city – a very different place to the Oxford we know today!

The John Lindsey Butcher & Son unit is situated in the earliest surviving part of the Victorian market, designed by architect Thomas Wyatt the Younger, and built as part of the ‘New Market’ extension around 1839-40. The unit holds high evidential value with the potential to reveal information about the earlier form of the market and its various phases of change. Not only of architectural interest, Units 46-48 were also constructed using a variety of local professions and therefore sheds light on the fortunes of individual trades in Oxford.

In May 2019, strip out works began in the unit, with the first element uncovered being the vaulted lath and plaster ceiling, which needed significant repair. When plasterboard was removed, wrought iron latticework was exposed, miraculously surviving in place between the units and wrapping around the outside, and originally the ventilation for the stalls.

Although we initially believed the columns to be made of concrete, the removal of many layers of paint has revealed solid stone columns hidden beneath. Careful restoration is now taking place to mend the damage and restore their structural integrity. Taking off the latex floor screed has uncovered the original stone flag floor, well preserved in parts, and instantly adding character to the building, so that a decision has been made to repair, seal and to leave it exposed. We were pleased to launch Oxford Open Doors 2019 at the Covered Market with the theme ’Made in Oxford’, and we opened the unit across the weekend for visitors to discover what we had found and to share our restoration plans.

In January 2020, restoration work began on the unit, with lath and plaster repairs on the ceiling and repointing of original brickwork. However, by the end of March, the COVID-19 pandemic had taken hold, and lockdown brought the work to a halt.

Nonetheless, by June progress was again being made with our dedicated and skilled contractors safely returning to the site. Keen to assist with the re-opening of the Covered Market to customers, a decision was made to remove the 1970s brick façade, which had been acting as the site hoardings, but was reducing the width of the aisle and space to move around within the market’s public areas. On 15th June, the Market reopened with the original building line restored, enabling improvement to the sightlines of the avenues, and reintroducing the architectural rhythm of the market. The rear brick wall looks splendid with its limewash, and we were all thrilled with the craftsmanship that went into saving and restoring Lindsey’s original painted signage above the door.

More headway was made in August and September, with the plastering, painting, skirting, block paving and ventilation being completed, as well as the installation of the windows, doorframes, joinery, and reworked iron trelliswork. A carefully chosen colour scheme was also agreed to act as an exemplar for work to other units in the Market that might come forward in future years. The team visited the site to assess the scope of works to the incredible original stone floor, which has now been pointed.

In 2021, the focus was on reaching project completion. This involved cleaning of the interiors, electrics, and final repairs to areas such as the fretwork.  Lattice grilles have also been fabricated and fitted within the unit.

The final touches also involved decorating the Units in a manner which was sympathetic with the original design- including the painstakingly detailed restoration of the old “Lindsey’s” sign above the units.

We are delighted that the units are now ready for new tenants to move into.  Oxford City Council, in collaboration with Makespace Oxford, helped provide temporary accommodation to local Oxford businesses until February, and now our first permanent tenant The Woolhound is open for business!  We are currently looking for tenants to move into the remaining units, so please visit the link HERE to learn more information & apply.

In time for Oxford Open Doors 2021, OPT were delighted to share with our members the new Un-Covered Market Audio Tour created by the Covered Market and funded by Oxford City Council and the Museum of Oxford.  The project brought together local historians, poets, filmmakers and artists to create "an immersive audio tour that’s part informative and part poetic wandering. The 15 minute tour leads you around the market allowing you to stop and notice things you may have overlooked and giving you permission to discover new things about this well-known, well-loved building."

The tour is free to stream/download, and all you need is a pair of headphones!  Discover the history of the Covered Market for yourself HERE.

As a communal, atmospheric, and trading hub, this Covered Market project has brought together multiple stakeholders. We are most grateful to Oxford City Council for their commitment to this project, working with James Mackintosh Architects, Cliveden Conservation, Croft Building and Conservation and Gelder Joinery.

Once again, a huge thank you goes to the William Delafield Charitable Trust, without whom this project would not exist.

Support Oxford. If, like us, you love Oxford, please support our work.

Watch the 'History of the Covered Market with Malcolm Graham' here, which was made for Oxford Open Doors 2020. This project was selected for the monthly film festival screening and was an Award Winner at the Tagore International Film Festival (Category of Educational Film). Debbie with Tom Gilman from the Delafield Trust 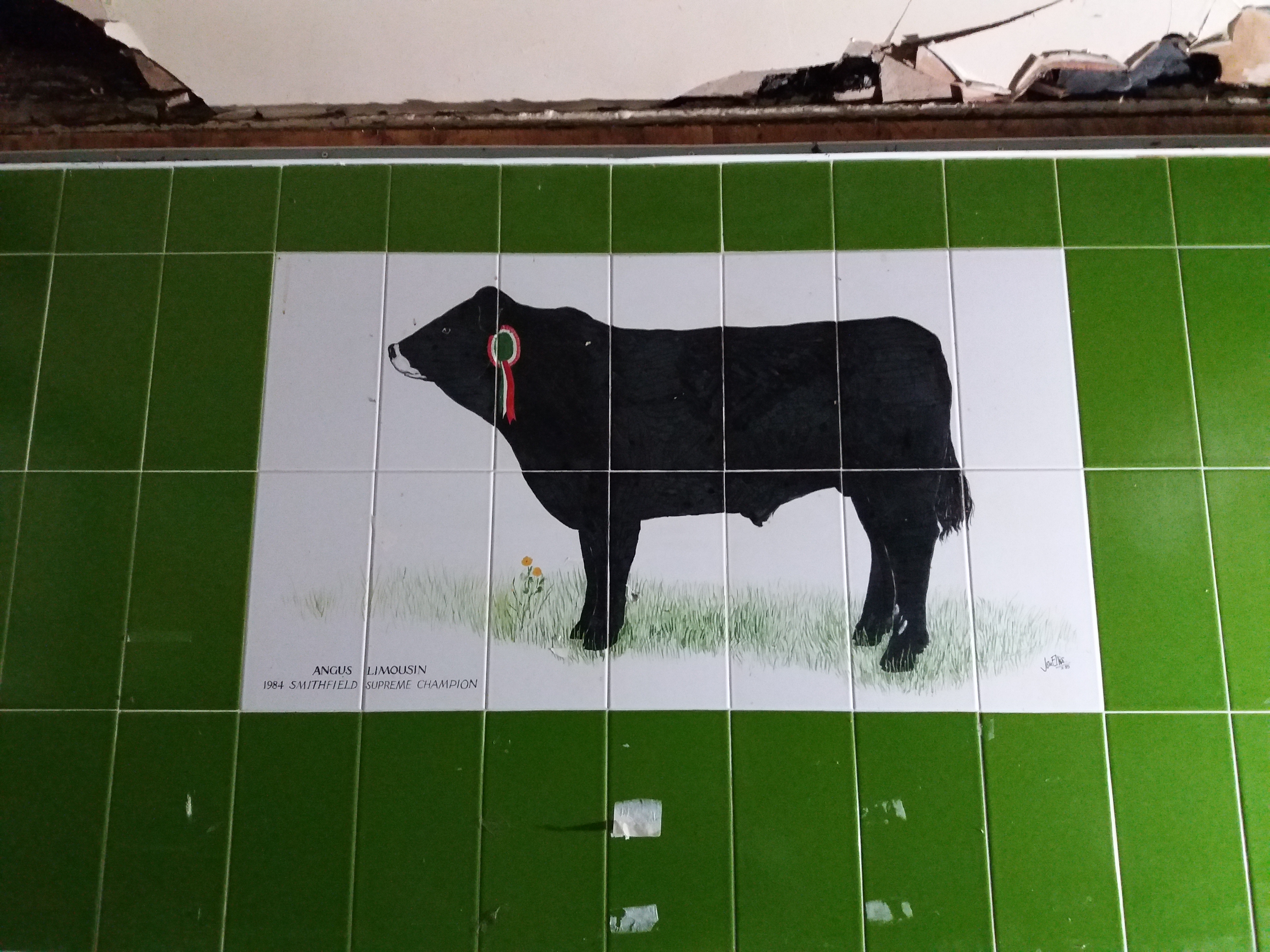 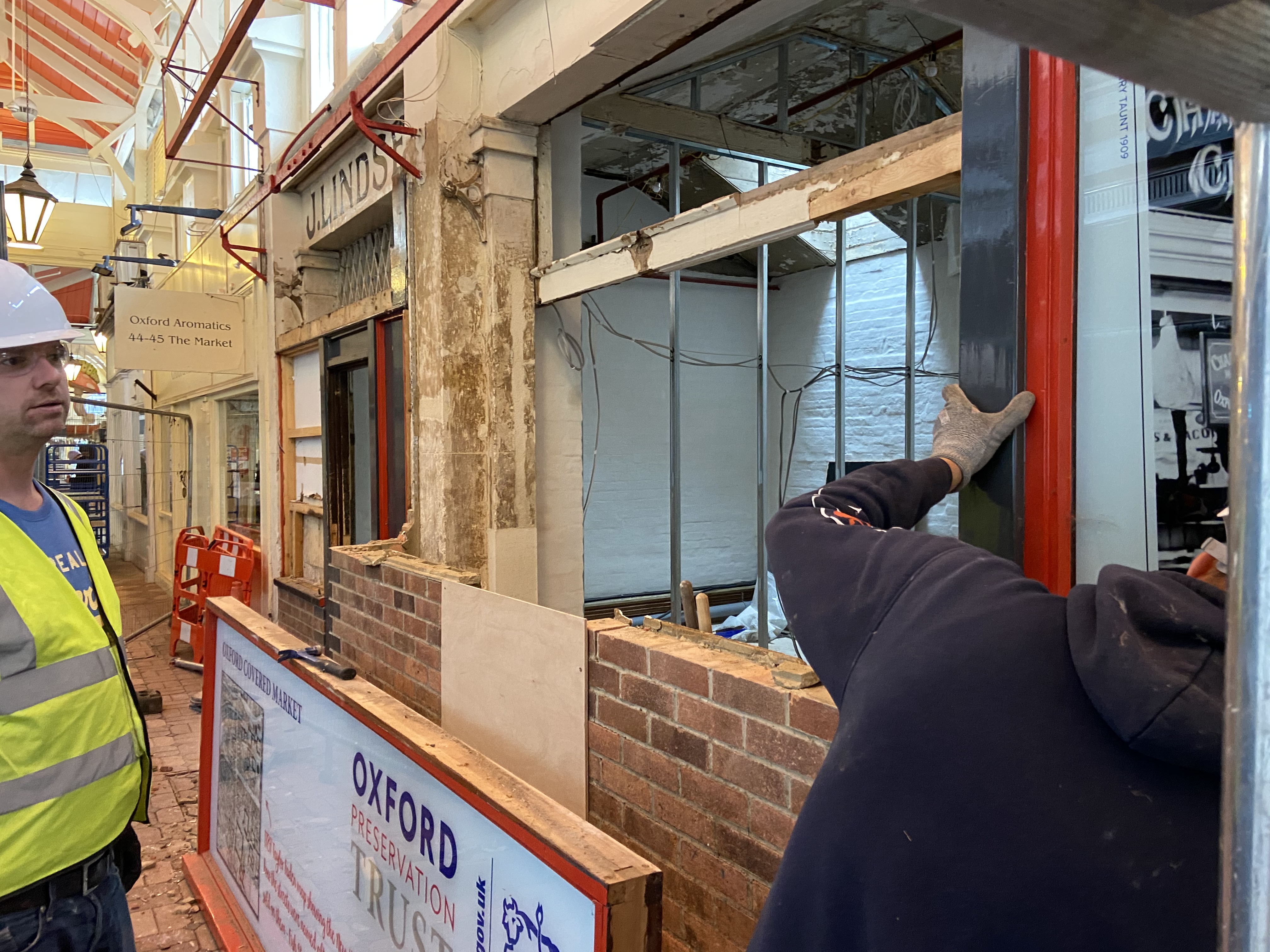